Situated on a commanding rise overlooking the village to the south, the Church of St Michael & All Angels sits alongside the ruins of the moated Lyonshall Castle.

The first church sited here was probably established to serve the castle, and it has been substantially rebuilt and extended since its earliest days of the 11th Century. The current building dates mostly from the 13th Century, but its appearance today owes much to a substantial renovation carried out in 1872-3 by the Rev. Charles Edward Maddison-Green. His wife was a sister of Sir Henry Rider Haggard, and during his years at the church he accomplished much. After the renovation of the church, he had a school built (now a private house immediately to the South of the church) and finally had a new vicarage built some 400 yards further up the hill.

The imposing church tower houses a peal of six bells, which were recast by Abraham Rudhall of Gloucester in 1727 and rehung in 1924 in a metal frame. The tower itself has been constructed in at least three different stages, and it was probably originally a simple wooden-framed structure. The substantial oak frame is still visible inside the base of the tower. 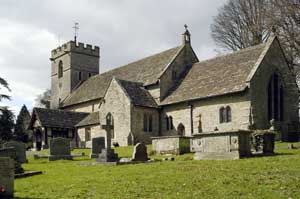